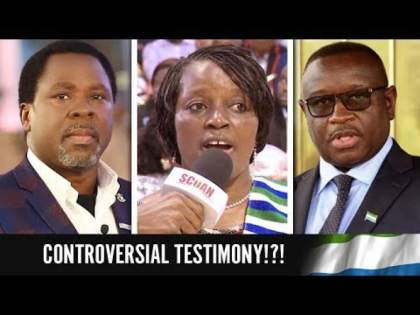 After news was widely circulated that a Sierra Leonean government official was ‘sacked’ following her testimony at T.B. Joshua’s church, the Nigerian cleric has responded by releasing a video of the lady’s controversial testimony.

Kargbo was invited for questioning by the nation’s anti-corruption agency after insinuations were rife at the speed of her apparent rise in wealth.

However, Joshua’s television channel, Emmanuel TV, released the video of Kargbo’s actual testimony, which she shared on Sunday 21stJuly 2019.

According to Kargbo, after visiting The Synagogue, Church Of All Nations (SCOAN) – “the house I constructed for 10 years without finishing – in exactly 14 years, I was able to complete it through the grace of God!”

This contradicts the narrative implied by most media reports that the Sierra Leonean politician amassed excessive finances within the short timeframe of her appointment as Bio’s Chief Protocol Officer in April 2018.

The clip released on Emmanuel TV also paints Kargbo as a patriotic figure who championed the cause of her nation during the deadly Ebola outbreak in the nation in 2014.

A letter from then President Dr Ernest Bai Koroma to Joshua, requesting his assistance in the nation to battle the deadly virus, is revealed, alongside a donation of $50,000 to Sierra Leone and 4,000 bottles of ‘Anointing Water’ to help curb the spread of the disease.

Kargbo reveals she personally received the gifts from Joshua – which were sent in a private jet chartered to the tune of $50,000 – and ensured they reached the affected areas, claiming that the regions where the ‘water’ reached were later declared Ebola free.

Although most media reports claimed Kargbo had been ‘sacked’ from her job, a statement from the presidential office indicated she had only been placed on leave pending the outcome of the corruption investigation.

To receive prophet TB Joshua morning water and stickers package, contact us on the email scoanonlineservices@gmail.com the package is free of charge we don’t sell it and so you shouldn’t sell it.