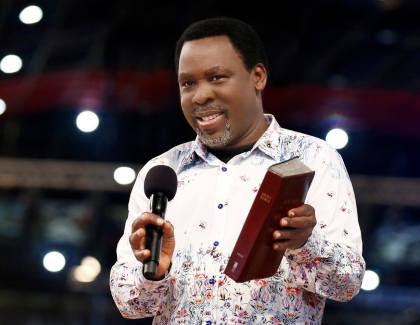 Since the early 90s when Prophet Temitope Balogun Joshua popularly called T.B Joshua’ s fame was on the ascendancy, he had always been trailed by one controversy or the other, but like a Phoenix that regenerates from ashes, he had always come out of those controversies, stronger. Not really for one day did his popularity waned. I recall that in those early days, one of the major issues that confronted the Prophet in the Synagogue was his source of power. The speculation then was he had some extraneous powers that had aided him in all the miracles that the church was known.

Indeed, some even whispered to those who cared to listen that T.B Joshua could never be heard calling the name, Jesus, thus confirming the fact that he had other powers behind him rather than that of the Almighty creator of the heavens and the Earth. To feed these speculations, it was said he had a place in the marshland of Egbe where even angels fear to trod. The marshland, incidentally, was where the ministry took off, a story of a humble beginning. That lie fizzled out because it had nothing to feed on. It died like others before it.

The story also came up that T. B Joshua got his powers from India and some ancient Asian countries. That also fell flat as one wondered why those who gave him the power could not wrought those miracles in their country or the source from where the power came from. The story went on and on because his was a phenomenon that defied human explanation.

I recall that as a cub journalist, my first contact with him and the Synagogue was borne out of fear which later turned out unfounded. At one of our Editorial meetings, a colleague who lived around the same axis as the church’s location had arrived the office breathless that Monday afternoon. He had a story to tell. On the way to work, he had sighted a horde of policemen around the church and was not sure what they were up to. The Editor had queried why he did not stop to find out and do a report. His response was indicative of the unfounded rumour that surrounded the Synagogue at the time. He told all of us in the Editor’s office that he could not do the report because of the unpalatable stories he had heard; that anyone that did a report on T.B Joshua would develop mental illness and probably end up a patient of “Yaba on the left’ or a tenant of a similar enclave in Aro, Abeokuta. Of course he could not substantiate what he said, he was only adamant on one point – no amount of persuasion would take him to the church to do the report.

Whether due to foolhardiness, ignorance or courage, yours truly decided to take up the challenge. After several visits to the church a very comprehensive report about the church and the man in the church was done. After the publication, I have never had cause to visit a psychiatric hospital.

But the Society was not done with T.B Joshua. The ‘war’ came from the Christian fold, most of the men of God forgot the teaching of the Bible, they judged, forgetting judgement is the Almighty’s. They more or less ostracised T.B Joshua. But he seemed to thrive on such adversities. The church that the ‘blind’ seers predicted would soon fold or would not last is still waxing stronger almost three decades after their carnally -inspired predictions.

Today, if you are talking religious tourism, the name that readily comes to mind is T.B Joshua’s and the Synagogue Church of All Nations in Ikotun-Egbe, Nigeria. The church can be described as the biggest religious tourism destination in the whole of the African continent today. The Nigeria Immigration Services (NIS) said six out of every 10 foreign travellers coming into Nigeria are Synagogue bound. The popularity of the church has led to more flights coming into Lagos from within and outside the country. Domestic visitors to the church come from far-flung places knowing they were bound for the solution to whatever problems they came to present. In and around the church location, businesses have also sprung up, thus empowering more local businesses and their owners. There are hotels around for those who are not Lagos residents. Restaurants and stores are equally making brisk businesses.

His teaching and preaching is not only feed for the soul, the physical is equally fed. Philanthropic gestures in places like Haiti after a devastating earthquake, Indonesian poor and the downtrodden, Mexico and Colombia are among the countries that have felt his touch of philanthropy. Nations have honoured him. In Israel, he is a spectacle who is accorded, symbolically, the donkey ride into Jerusalem. The red carpet is ever laid for him during any of his visits. He had even been urged to establish a religious presence in that country with land already available for that purpose. During his visit to Dominican Republic in 2017, he was accorded the royalty treatment. He was met at the Las Americas airport by the leadership of that country. It was a carnival like atmosphere. By the time he ended his crusade about three days later, Dominica stood still. And to appreciate him, he was honoured with the highest award in that country by the parliament.

Consequently, the accolades in the last 30 years, from a humble beginning to the present growth, spreading the gospel and providing succour in all corners of the World, have made something poignantly clear, T.B Joshua is a permanent fixture in the Lord’s vineyard. He can never be wished away.