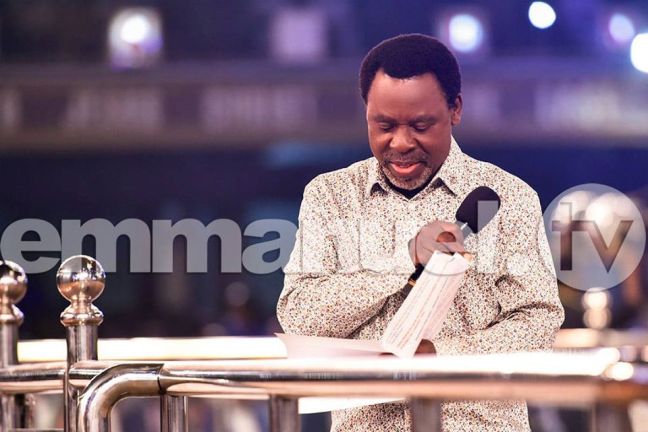 During his church service at The Synagogue, Church Of All Nations (SCOAN) on Sunday 5th January 2020, Prophet TB Joshua released his much-anticipated prophetic message for the year 2020.

The eleven words of prophecy touched on a wide range of topics, including messages for Nigeria, Iran, America, Russia and the United Kingdom.

The cleric, who was absent during last week’s service at an undisclosed ‘prayer mountain’ where he was ‘seeking the face of God’, explained the revelations came to him on December 28th 2019.

“Let us pray for the Nigerian government to be able to finish this year without an interlude that will cause a situation of for and against,” Joshua stated in a parabolic message to the administration of President Muhammadu Buhari, calling on people to join him in prayer for Nigeria.

He additionally addressed Nigerian Vice President Yemi Osinbajo. “Vice President, it is not yet over. Expect much more pressure. The pressure will be so much. I pray you will be able to stand the pressure.”

The cleric revealed he had foreseen the US attack which led to the death of Iranian military Commander Qassem Soleimani, sparking a dramatic escalation in tensions between the two nations.

“An incident will happen to the nation Iran that will cause panic throughout the world. We are praying to know the mind of God concerning this,” he wrote in the prophetic message on December 28th, just days before the deadly drone strike in Baghdad, Iraq.

Joshua called on America to “invest more in agriculture”and “encourage their farmers” due to impending economic challenges in the nation.

He equally spoke of the upcoming Presidential elections in USA scheduled for November 2020. “Also, approach to the security issue will affect the candidates and swing voters in the next election. It will be tough in the election. They should pray against a recount. It may be too tight.”

Joshua then addressed Russia, calling on the nation to“pray for their leader to avert his being on the sickbed. There is a ladder to go up – if this is averted,” he added.

Speaking in more general terms to leaders worldwide, he added: “Many sicknesses and diseases that leaders have been treating privately will surface this year. They will become bedridden and many will not make it.”

Regarding the United Kingdom, Joshua spoke of “agitation from a section that wants to leave”, additionally calling for prayers for the Royal Family.

“Brexit needs more time to stand on its feet – with more co-operation of the EU leaders,” he added. “If not, there will be economic repercussions and the cost of things will become unbearable. With time and preparation, all will be well.”

In a message affecting the general populace, Joshua warned of a ‘common medicine’ that will “cause people to be ‘high’ to die, to commit suicide”. “The governments of each nation should watch out and put a check on pharmaceutical drugs that come to their country,” he cautioned.

“This year will be a year of humility,” he continued, stressing that “this year, the Lord will humble us with our challenges.”

Joshua revealed the only remedy was to “move closer to God”, explaining that weaknesses and bad habits would “destroy us or exposes us” as a means of bringing humility.

Finally, the cleric spoke of those involved in the work of God. “People will be getting tired this year because the work of God is not by power and might,” he revealed, warning of “so many challenges, tribulations and burdens they will not be able to bear”.

“Our prayer warriors are on their knees praying to make sure the changeable ones are changed,” the cleric stressed, adding that two additional parts of the prophecy would be revealed in due course. “Prophecy is a guide to life.”

The service was broadcast live on Emmanuel TV, which just became the world’s first Christian ministry YouTube channel to break the milestone of obtaining 1,500,000 subscribers.